One of the most important buildings of Charles’s era was the stone bridge across the Vltava River, connecting the Lesser Town with the Old Town. It was called Stone Bridge or Prague Bridge; in 1870 it was officially renamed to Charles Bridge. Charles was driven to build the bridge by the necessity to reconnect both banks of the river after the 1342 flood that destroyed the old Judith Bridge; the temporary wooden bridge didn’t meet the requirements and prestige of the metropolis. At that time, the only stone bridges in Bohemia were built in Písek and Roudnice nad Labem. The building commenced in 1357, and finished under the reign of Charles’s successor Wenceslas IV in 1402. 
The historians say the most probable date of foundation is June 15, the day of the Czech patron St. Vitus. This hypothesis is supported by the depiction on the front side of the Old Town Bridge Tower – here, St. Vitus is standing on the bridge, which means that the bridge is put under his protection. Then there’s the interesting, though somewhat speculative theory of the astronomer Zdeněk Horský (1929–1988). He said the bridge was founded on July 9, 1357, at 5:31 AM, as the sun was in a favorite conjunction with Saturn. The author also points out that this day and time give the full sequence of odd numbers: 1–3–5–7–9–7–5–3–1. As for the project designer of the bridge, most art historians agree on Peter Parler, yet according to an alternative theory it was Prague citizen Otto (Otlin).


The bridge is approximately 516 m long, 9.5 m wide, and the height over the Vltava surface is 13 m. It consists of 16 arches with pillars built on oak poles and millstones; rumor has it that the mortar was mixed with eggs and wine. The construction was very expensive, so there was toll for crossing the bridge until 1816. In the Middle Ages and later, the bridge witnessed many important events. In 1378, the funeral procession with Charles’s body crossed the unfinished construction; in 1393, John of Pomuk, Vicar General of the Archbishop, was thrown from the bridge to Vltava River (in the baroque era, he was canonized as St. John of Nepomuk). The first cross on the bridge dates back to Charles’s times; in the late Gothic era, the Crucifixion sculpture was built, as well as the statue of Bruncvik (Roland) at the Lesser Town side, to mark the limits of the Old Town legal system. 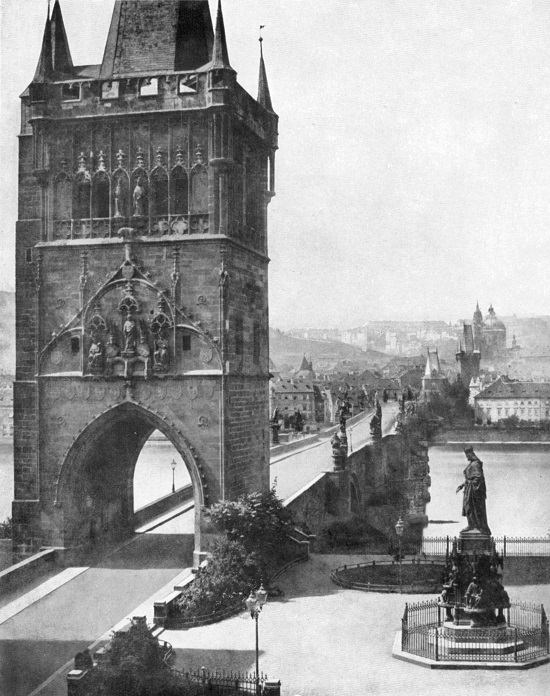 
The dominant building of the Old Town side of the bridge is the huge, beautifully adorned, three-floor Old Town Bridge Tower, built by Peter Parler and his workshop in 1370s and 80s on the first inner pillar. The bridge is built of stone blocks and finished with the roof, now covered in slate, originally in gilded sheet steel. The passage in the tower is vaulted by the original ray-like vault of the Parler type, adorned by the open royal crown in the center. In the beginning, the eastern and western side of the tower were also decorated with sculptures, but the western part was heavily damaged in 1648, during the Swedish siege of the Old Town, as stated in the inscription on the stone plate.


On the other hand, the decorations on the western side (resembling a triumphal gate) have preserved. Just above the passage, there are crests of lands ruled by Charles IV. In the broken Gothic arch, there is Charles IV on the right side (which is, from the heraldic point of view, more important) and his son Wenceslas IV, King of Bohemia, on the left. Between them, we see two bridge arches, and St. Vitus upon it. A heraldic plate with the St. Wenceslas eagle is placed in the point of the arch. The third floor contains sculptures of Czech patrons: St. Prokopius (or St. Adalbert) and St. Sigismund, with a mighty lion under their feet. The destroyed western part probably contained the standing statue of Virgin Mary clothed in the sunrays, with St. Wenceslas and St. Adalbert. The lower part of the eastern face is decorated by numerous small symbolic sculptures (e.g. a lion fighting an eagle). Special attention should be paid to the symbols of Wenceslas IV – wreath with a kingfisher, also adorning the king’s manuscripts. The original wall paintings on the vault ceiling in the passage, heavily repainted, were probably also made in the times of Wenceslas IV. They depicted the figures of female barbers, corresponding, just like the kingfisher, to the symbolism of Wenceslas’s court. 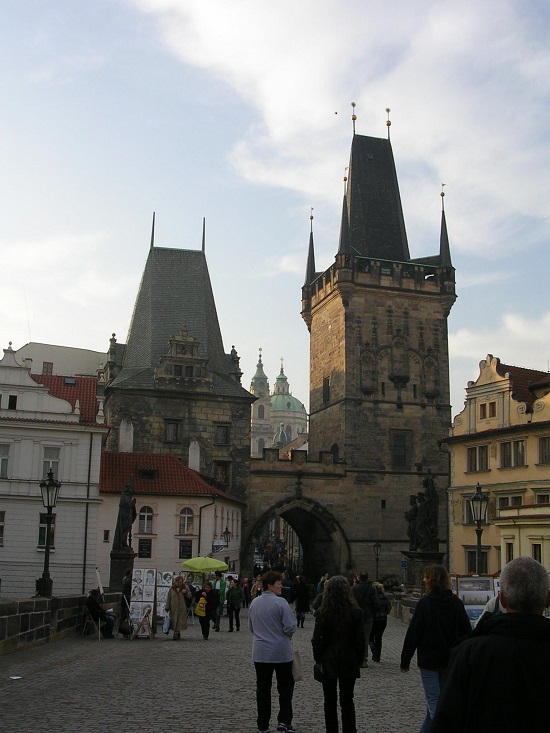 
The entrance to the bridge from the other bank – the Lesser Town – was guarded by two more towers – one higher, one lower. The latter, called also Judith Tower, had previously been part of the older Judith Bridge. It was a Romanesque three-floor building made of argillite masonry, from the second half of 12th century. In the end of the 16th century, in was rebuilt in the Renaissance style, and the new form has preserved thus far. The second bridge tower – the higher one – was built later in 1464, in the time of the King George of Poděbrady, in the place where the second Romanesque tower had been. The building of the Gothic tower had started already in the early 15th century, but the turbulent Hussite times put the project on hold. The design of the tower copies the Old Town counterpart, but it lacks good sculptural decorations and well-thought symbolism. The alcoves were probably designed for the statues of Czech rulers, or the builders of the bridge.


Both towers are connected by a Gothic gate, probably built during the reign of Charles’s son Wenceslas IV. The gate consists of two broken arches and parallel arcades. The top edge of the gate is fitted with a battlement, with a passage facing the bridge, connecting both towers. The battlement displays crests of the imperial eagle, Bohemian lion and Oberlausitz, with crests of the Old Town and the Lesser Town below. In the past, the gate could be sealed by heavy oak door and iron bars.