„With a great honor and pride, an educated Czech looks at the Karlštein Castle, the work of famous and venerable Emperor Charles. There could be no better monuments to the mighty King that took such a good care of the country consigned to him by the Lord, and made it equal to the best educated empires of his time, than those made by himself.” That’s how the description of the Karlštejn Castle begins in the famous book Castles, Chateaus and Strongholds in the Kingdom of Bohemia by August Sedláček. Indeed, the Karlštejn Castle is one of the most important and best known heritage sites in the country, and it’s also the castle that attracts most visitors (except the Prague Castle). What has, however, made this castle, towering on the rocky hill over the Berounka River some twenty kilometers from Prague, this famous? The answer is easy – it was the persona of its founder, Emperor Charles IV, and the castle’s unique position in the Kingdom of Bohemia. 
The castle was founded in 1348, in the year where Charles’s foundation work was at its best. As the later tradition goes, the accurate date was June 10. The foundation stone was laid by the Prague Archbishop Ernest of Pardubice, on Charles’s behalf. This fact also proves that Charles considered the castle really important. Karlštejn was ready to permanent residence since the mid-1350s approximately. The symbolic date of the project completion is March 27, 1357, as the Chapel of Our Lady was consecrated, and the Karlštejn Chapter was established. Art works at the castle went on until mid-1360s. Karlštejn was designed to become the place of the emperor’s final rest, but primarily a giant jewelry box, guarding the most important treasures of the Holy Roman Empire, especially the imperial coronation jewels, and saint relics.


The location of Karlštejn is rather specific; it’s affected by the needs of the royal court as well as by the true function of the castle. It was built in three basic segments, in different vertical planes, with different purposes. The lowest level consists mainly of residential and service areas. It includes the Burgrave House, which hasn’t preserved in its original medieval form due to the reconstruction in the 19th century, and, behind the gate and the castle wall, also the imperial palace. The second floor of the palace featured “the Luxembourgian Family Tree” in the Middle Ages, depicting the members of the dynasty with their ancestor, both real and imaginary ones. Unfortunately, the family tree didn’t survive renaissance reconstructions of the castle; yet its form is depicted in the Heidelberg Codex.


The second level features the Marian Tower, with the Chapel of Our Lady adorned by monumental frescos with Revelation depictions, and the “Relics motifs”. Adjacent is another sacral area, now consecrated to the king’s favorite saint, St, Catherine (originally the Chapel of Holy Martyrdom Relics). Finally, the highest level features the Great Tower with the Chapel of the Holy Cross, the place to store the imperial jewels. Charles himself made several changes of the plans during the construction, so the purpose of several rooms and areas changed during the 1350s. For example, the establishment of the Chapter in 1357 required changes in the minor tower that had been almost finished at that time, especially by turning several secular areas to sacral ones. In the early 1360s, it was decided to store here the imperial treasure, including the most precious items – the crown jewels. For this purpose, the Chapel of the Holy Cross was built in the Great Tower between 1357 and 1365, with specific mode of operation. 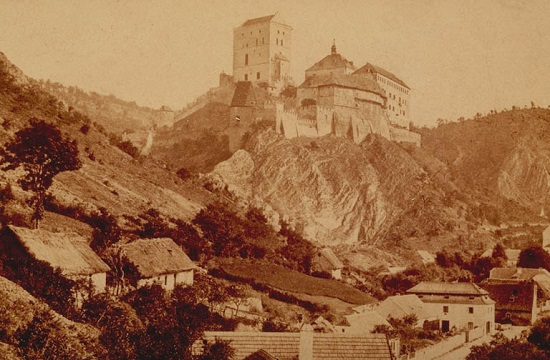 
The Chapel of the Holy Cross is the most sacred and worthiest area in the castle. As a room to store the precious jewels, relics and other sacred items, the operations of the chapel were governed by special provisions. The access was granted to a special group of people only, and it was subject to the Imperial Ban, famously (and, let’s face it, a bit too dramatically) depicted in the play A Night at Karlštejn by Jaroslav Vrchlický. As we may read in the constitution of the Karlštejn Chapter, “in the tower of the Karlštejn Castle, where the memorable chapel is located, no one is allowed to sleep or lie with a woman, even with his lawful wife.” The emperor has the sacred area decorated in a great style. The walls are lined with precious stones arranged in crosses, surrounded by gold. Also the vault of the chapel is gilded, to symbolize the starry sky. Probably the worthiest part of the decoration features the set of 129 painted panels made by Master Theodoric between 1357 and 1365 (the complete set included 130 panels, one of which got unfortunately lost). The panels depict saints, church fathers and kings, gathered together in the army of Christ (including the apostles, St. Charlemagne, St. Ludmila, St. Catherine, St. Jerome etc.). These decorations are completed with the altar depicting the Crucifixion, and the triptych by Tomasso da Modena. The most sacred area of the chapel, with the alcove to store the jewels, is separated by a bar. The stairway to the chapel displays mural paintings with scenes from the lives of St. Wenceslas and St. Ludmila.


After the death of Charles IV, the castle was used by his son, King Wenceslas IV (1378–1419). At this time, the Bohemian crown jewels were stored here, until the beginning of the Hussite wars, and then again until the start of the Thirty Years’ War. In 1422, Karlštejn resisted the siege by Hussite troops. During the 15th and 16th century, the castle went through a series of adjustments and reconstructions that changed the original form of Karlštejn to a certain point. Yet the castle retained its importance for the State of Bohemia for quite a long period. In addition to the royal crown jewels, it was also used to store a set of the Land Records, after the fire in the Lesser Town in 1541. The castle was reconstructed heavily in the end of the 19th century; the major reconstruction started in 1887. Most of the adjustments were made by architect Josef Mocker, who was in charge of the purist reconstruction of Karlštejn between 1892 and 1899. Though some changes weren’t entirely in line with the original form, the reconstruction did save the deteriorating building. These days Karlštejn is one of the most popular tourist destinations in the Czech Republic, visited by hundreds of thousands people from all over the world.