These days, the era of Charles IV primarily speaks to us via buildings founded by the famous king of the Luxembourgian dynasty. Especially the buildings in old parts of Prague have become immortal monuments of this King of Bohemia. First and foremost, St. Vitus’s Cathedral at the Prague Castle immediately springs to mind; however, its construction had already started in 1344, i.e. in the very end of the reign of Charles’s father John. Yet it was under Charles’s rule that the cathedral was given its form, inspired by similar French buildings, thanks to Matthias of Arras and Peter Parler. The cathedral wasn’t finished during Charles’s life, though; the final touches to its current form were put as late as 1929. The whole Prague Castle was reconstructed during Charles’s reign, as it wasn’t fit for the Bohemian King and Roman Emperor to have the castle in the heart of his kingdom “brought down to the ground,” as it had been in Charles’s youth.


In 1357, near the former St. Clemons’s Monastery, Charles laid a foundation stone of the new stone bridge across the Vltava River, to replace the wooden bridge connecting the Lesser Town and the Old Town. The wooden bridge was a temporary replacement of Judith’s Bridge that had been destroyed by a flood. In the middle ages, the new bridge did not bear Charles’s name yet; it was simply called the Stone Bridge. 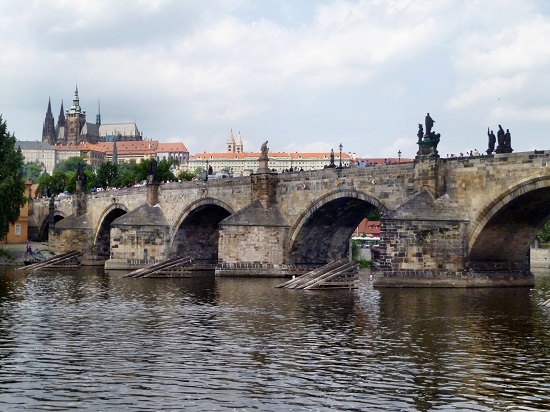 
The most important foundation work of Charles IV in Prague was no doubt the New Town, one of the few urban areas built in the Luxembourgian era. The area of the New Town surrounded the whole Old Town, and its ramparts connected to the Vyšehrad Castle in the south. Also Vyšehrad was reconstructed by Charles who took his Přemyslid legacy very seriously. The New Town area was about 360 hectares, with two central points: Cattle Market (current Charles Square) and Horse Market (Wenceslas Square). With the sheer bulk of ramparts and gates, and the number of churches, the New Town came close to the center of the Christian world – Rome.


Charles is also famous for his foundation of castles; most of them bore, or still bears, his name. They include Karlsburg (Tepenec in Moravia), Karlskrone (Radyně near Pilsen), Karlsberg (Kašperk in Böhmerwald Mountains), Karlshaus (Hrádek near Purkrarec) or a small customs castle of Karlsfried. Charles also initiated the major reconstruction of the ancient castle of Oybin near Zittau, with a new extension – the Celestine monastery.


Yet all these castles were outshined by Karlštejn, one of the most famous Czech castles ever. From the architectural point of view, the castle was very outdated, and also built rather unsuitably in terms of safety, as all surrounding hills were higher, making Karlštejn an easy prey for potential attackers. In fact, the seemingly ancient form was Charles’s way to honor the traditions of the Přemyslid castle architecture. Even though Karlštejn was originally probably intended as a place of contemplation for the king, it became the place to store Czech and Imperial coronation jewels and sacred relics, and also the seat of the chapter founded by Charles. 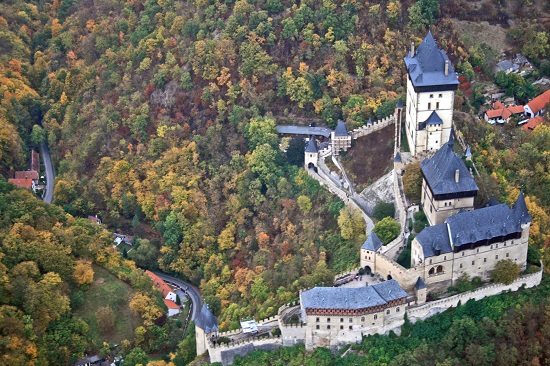 
We can’t forget Charles’s foundation work outside the limits of the Bohemian Kingdom either. In Lauf near Nuremberg, on the island in the middle of Pegnitz River, Charles founded the Wenzelsburg Castle. Like many previous times, he hereby honored the Přemyslid legacy, this time by naming the castle for the most important Bohemian saint. So far, the most magnificent room in the castle is the hall decorated by 112 crests of the representatives of the royal castle and important towns. In his last years, Charles started building the new Luxembourgian seat in Tangermünde, Brandenburg. He made a major reconstruction of the castle, planning to found a new chapter in its premises. The castle palace was richly decorated by frescos, yet we can but read of them these days as much of the castle hasn’t been preserved.


These days, the projects founded by Charles IV aren’t mere monuments of the famous sovereign’s times, or tourist attractions admired by visitors from all over the world. They are primarily Charles’s legacy for future generations, as part of the landscape, culture and identity.