On 2 September 1347, in a half-built St. Vitus Cathedral in the Prague castle, an ancient seat of Bohemian princes and kings, Prague archbishop, Ernest of Pardubice (1344-1364), crowned at that time thirty-one year-old Luxembourgian Charles the King of Bohemia. Charles who was born 14 May 1316 was, at that time, already crowned the king of Rome (the coronation took place in Bonn in November 1346). Even though the beginning of Charles' reign was all but calm (the Emperor Louis of Bavaria, supported by some imperial elites, was against him then), Charles truly made his Bohemian coronation matter. 
Tiara, which Ernest of Pardubice put on his head, is now known as the Crown of St. Wenceslas. Charles got it made apparently shortly before the ceremonial act. The Bull of Pope Clement VI of May 1346 informs us that Charles got a new crown made, which he dedicated to St. Wenceslas. The case, in which the crown was transported, states the year 1347. This means that the crown was made probably sometime between the beginning of 1346 and his own coronation. In terms of shape the crown most likely followed on earlier Přemyslid tiaras, the precise form of which we do not know, because only funeral crowns from the 13th century are preserved. We can get some idea, however, from some material sources. Vratislav II (1061-1092) became the first King of Bohemia in 1085. Later, this dignity was given to his grandson Vladislav (1140-1172) in 1158. The coins minted during the reign of the mentioned kings show some sort of crown, but it is of a rather schematic character. At the beginning of the 13th century, the royal title became definitely hereditary and in the years 1197-1306 five Premyslid kings ruled successively.


In addition to the aforementioned funeral kits we can get some idea about how the royal crowns looked also from several depictions. As an example we can mention illumination of King Wenceslas II (1278-1305) on the throne of Codex Manesse from the early 14th century, or the majestic seal of King Přemysl Ottokar II (1253-1278). The depiction of Přemyslid kings in the manuscript of Zbraslav Chronicle (early 14th century), or a crown stamped on the obverse of a Prague nickel (after 1300) are a little younger. This, however, according to some opinions might not actually have existed at all and it was only symbolic. These Přemyslid crowns had four (in en face images only three are visible) parts completed with the shapes of lilies. The crowns of French kings probably served as another model for the St. Wenceslas crown. Since 1323, Charles lived for several years in the Capetian palace in Paris and in 1328 experienced the coronation of King Philip VI (1328-1350). We can get some idea of how the French crown looked from the so-called illuminations in the so-called Big French Chronicles. The crowns on heads of the Capetians represent the classic type of high medieval jewel with four segments, completed with lilies, similarly like the Přemyslid tiaras. 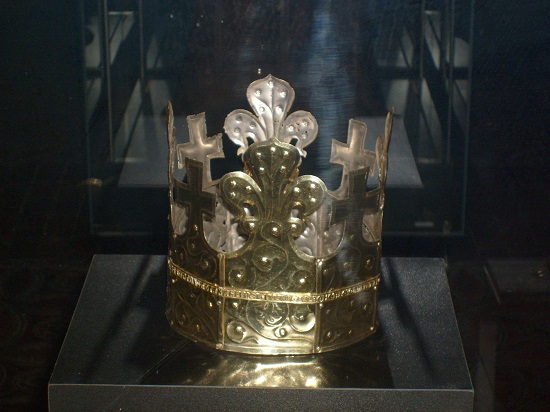 
The St. Wenceslas crown is a jewel of high quality design. It is made of gold of very high purity (21-22 carats). The crown with a diameter of 19 centimetres weighs 2,358 kg. The crown’s height is equal to the radius. Two arches, through which the crown is connected, carry the cross in its centre, where a thorn from Christ's crown of thorns is stored, of which the Latin inscription HIC EST SPINA DE CORONA DOMINI (i.e. here is a thorn from the crown of the Lord) around the perimeter of the cross informs us. Even the artistic decoration of the crown itself is impressive. The total of 96 precious stones are located on the crown, among which there are some very rare and unique pieces, especially on the front of the crown. The stones were added to crown throughout the life of Charles IV, as the emperor was gradually collecting them. The location of the precious stones follows a rigorous program and has a profound symbolism that we are nowadays able to decipher exactly. 20 pearls accompany the precious stones: 16 on the arches, and 4 on the tops of lilies. After 1374, Charles initiated a significant redesigning of the crown. We are informed about the original form of the crown from the description in the inventory of the St. Vitus Cathedral in 1354.


Orb and sceptre also belonged to the crown. Kaiserliche Schatzkammer in Vienna now owns the original instruments from the Middle Ages. Current orb and sceptre originate from the first half of the 16th century and it was Ferdinand I (1526-1564) had them created. Both insignia become a part of the series of Bohemian crown jewels during the 17th or 18th century, i.e., at the time when the St. Wenceslas crown was already stored in Vienna. This brings us to the question of jewels storage. According to the instructions of Charles IV the crown should have rested on the skull of St. Wenceslas and should have been stored at the Prague Castle in the cathedral. But we know that already during the reign of his sons the crown left its original location. It was stored in Karlštejn and during the Hussite wars even outside the kingdom. After the lost Battle of White Mountain, the fleeing Frederick Palatine left the jewels at the Old Town Hall, then, they were transported to Vienna, from where they were always brought to Prague for coronation. In 1791, Leopold II Habsburg returned the jewels to Prague, and since then they have been stored at the St Vitus Cathedral.


Today the storage location of the jewels, i.e., a crown chamber of the St. Wenceslas Chapel, is basically an inaccessible area protected by a door with seven locks. The crown jewels today represent the most valuable treasure in our country and are displayed only on special occasions. It is an ancient, but still a very strong symbol of the sovereignty of the state and its solid place in European history.