We don’t know much about the lives of medieval queens. Their stories are reconstructed from various incomplete sources, references in chronicles and fragments of documents. We therefore can’t say much of the life of Blanche of Valois, the first wife of Charles IV, yet we have more information on her than on many of her peers. Her story, though, can’t stand alone, separated from the story of her husband. Even the very first reference to her person is related to Charles IV – it’s included in Charles’s autobiography Vita Caroli Quarti: “Anno domini one thousand three hundred twenty-three, my father sent me to aforementioned King of France in the seventh year of my boyhood; the French king had me confirmed by the bishop, and gave me the same name he had, Charles. And then he gave me the daughter of Charles, his uncle, by the name of Margaret, called Blanche, to marry.” Similar information is also included in the Zbraslav Chronicles: “The boy of eight got engaged to a girl called Blanche, a sister of French king Philippe, of the royal house.”


The 7-year old girl of the Valois house was christened Margaret, yet everybody called her Blanche, allegedly for her fair hair. We don’t know much about her childhood in France. We can only assume that she enjoyed the education typical for noble girls – social conduct, manual crafts, dancing, horse riding, foreign languages. We, however, know nothing about her literacy. 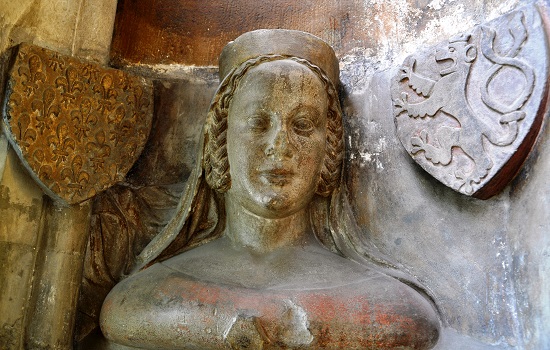 Bust of Blanche of Valois on the triforium of St. Vitus Cathedral


The further information dates back to 1330. In the quoted autobiography Vita Caroli, Charles IV writes: “The king sent me back with my wife, his sister Blanche, to my father John, King of Bohemia, to Luxembourg.” Blanche of Valois lived in Luxembourg for three years, while her husband spent this time in Northern Italy, supporting the interests of his father John in the “Italian signoria”. This Luxembourgian struggle to seize the regions in Northern Italy, such as Brescia, Bergamo, Parma, Cremona, Pavia, Reggio or Modena, or Lucca in Tuscany, didn’t succeed in the long run, though.


In 1334, the throne pretender Charles returned to Bohemia. His autobiography describes lively that he found the kingdom ravaged, with villages burned down, and Prague Castle unfit to live in. At the same time, however, he wrote: “At that time, we have sent for our wife, still dwelling in Luxembourg. She arrived, and after a year, had the first daughter Margaret. It was the time our father gave us the margraviate of Moravia, so we used that title.” Before Charles and his wife moved to Moravia, Blanche’s arrival became an important event, mentioned by the author of the Zbraslav Chronicles Peter of Zittau: “That year, on Sunday evening, June 12, Lady Blanche, wife of Charles, heir of the Kingdom of Bohemia and Margrave of Moravia, came from France to enjoy a glorious and warm welcome from the clergy and all people of Prague. At the time, she found a home at the Prague Castle.”


After a month, a large part of Blanche’s entourage returned to France. We can only guess why it was, but we can assume it was a pragmatic move to minimize the disputes between courtiers of various nationalities. Should we again resort to period chronicles, we’ll find that Blanche “…certainly pleased everyone by her beauty, and I hope she will be loved for her virtues too; she brought with her the customs of her nation in ladies’ fashion, and rich trousseau as required by her position and the royal house.” That’s what Peter of Zittau tells us in his Zbraslav Chronicles; other chroniclers offer similar testimonies. 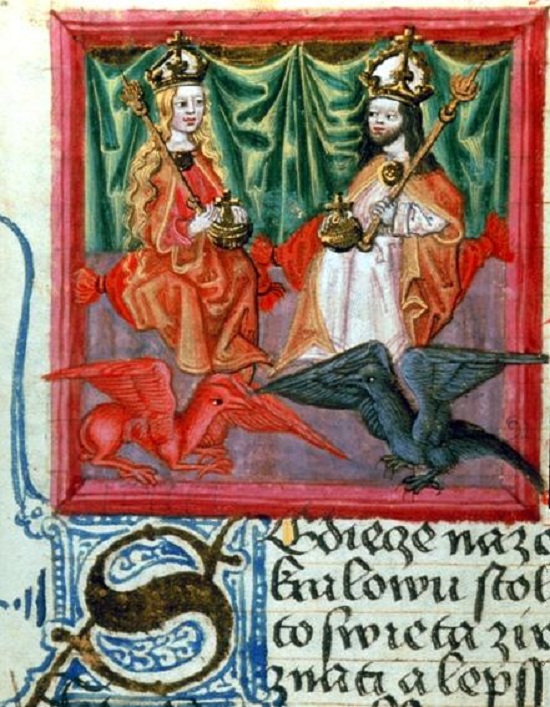 Charles IV and Blanche of Valois


As far as available information goes, the marriage of Charles IV and Blanche of Valois was happy. They had two daughters – Margaret (1335–1349) and younger Catherine (1342–1395). At the age of seven, Margaret was married off to the Hungarian king Louis I, 16 at the time; she died childless at the age of 14. Catherine was married off at 14 to Rudolph IV of Habsburg. In 1365 she became a widow, and a year later she was married off again, this time to Otto V of Bavaria, the Margrave of Brandenburg. She spent the rest of her life in Prague and Vienna where she was buried.


We cannot tell more about other relationships of Blanche of Valois to other people. There’s a brief hint in the story told by Peter of Zittau, commenting on the Prague journey of Beatrix of Bourbon, the second wife of King John of Bohemia. “An unexpected but true rumor spread in the Bohemian Kingdom: in France, King John lawfully married a maiden Beatrix, daughter of the duke of Bourbon, Earl of Clermont.” She was, to some point, Blanche’s competitor; in 1337, Beatrix of Bourbon was crowned the Queen of Bohemia. She didn’t, nevertheless, ever felt at home in the Bohemian environment, and the relationships to the stepson’s wife weren’t great either. King John allegedly cast Blanche out of the Prague court for some time, wishing to avoid quarrels. However, Beatrix of Bourbon didn’t last long in Prague, though she gave birth to two John’s children – son Wenceslas and daughter Bona. Shortly after that, she moved to Luxembourg where she spent the rest of her life. Peter of Zittau noticed wryly that “the people celebrated her departure more than her arrival.”


An important cornerstone in the lives of Charles IV and Blanche of Valois was the coronation of the King and Queen of Bohemia in 1347. The ceremony took place on September 2 in St. Vitus’s Cathedral at the Prague Castle, it was celebrated by the Archbishop Ernest of Pardubice. For this opportunity, Charles ordered the St. Wenceslas’s Crown, and the coronation code for kings and queens of Bohemia (Ordo ad coronandum regem Boemorum) was written. A special ceremony was designed for the queen’s coronation: the queen was led before the altar with her hair loose, knelt down, touched the ground with her forehead, then the archbishop gave her his blessings just like he did to her husband, placed the scepter to her hand, put the royal ring on her finger, and placed the crown on her head. The abbess of St. George’s monastery then led her to the throne where the new crowned queen sat at the king’s side. 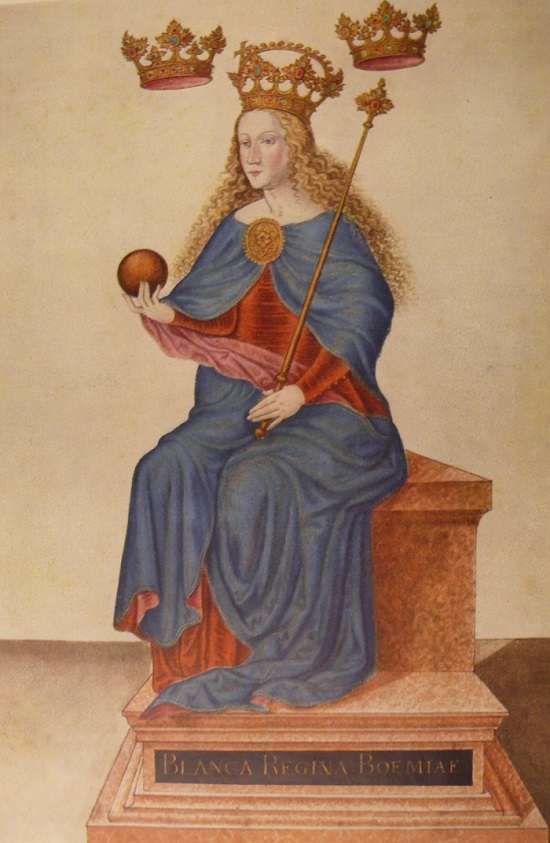 Blanche of Valois on the painting Nicholas Wurmser


Blanche of Valois died on August 1, 1348, in Prague. The historians are still unsure about the cause of her death, and the accurate answer is probably impossible. Some researchers suspect plague, the “black death” spreading across Europe since 1347. This theory is, however, challenged by the fact that the plague epidemic only hit Bohemia two years later. Of course, there are other possibilities, more or less probable. It could have been a rapid disease with unpredictable development, or tuberculosis, or even an accident.


It’s true we don’t know much about the life of Blanche of Valois. All information we got are more relevant to the deeds of her husband. We know nothing about her material situation, about the people on her court, or about her donor activities – the sources are really sparse. The chronicles left us only with incomplete hints, and most of the diplomatic documents haven’t preserved. We can however say that she was one of the first Bohemian queens not coming from German or Polish territories. Her French origin lifted the wedding policy of Bohemian kings to a higher level.