“Anno Domini 1348 [the correct date is 1349], on the day of St. Wenceslas’s transport, on Wednesday before the Reminiscere Sunday, Lord Charles, King of Rome and Bohemia, married the daughter of the Earl of Bavaria, Anna; the wedding was celebrated on the Bacharach Castle on the Rhine River. And in the same year [correct: 1350], on Sunday of Omnis terra [January 17], the Queen gave birth to her first son. He was baptized ceremonially at the Prague castle in the cathedral church by the name of Wenceslas.” This short excerpt from the chronicle by Francis of Prague is a brief introduction of the second wife of Charles IV, and describes the birth of the much-wanted male successor. Both, however, vanished from the sovereign’s life soon, and left only a faint trace in the available sources. Yet the king’s second wife is a great example of the political role of medieval royal weddings, and the importance of maintaining the house in the male line.


Our information on Anna of Bavaria and her life is sparse – mainly because the short marriage with Charles IV. It lasted only from 1349 till 1353, and therefore was really short even for a medieval royal marriage. The chronicles only give us brief accounts of important events of Anna’s life – wedding, coronation for the Queen of Bohemia, and death. She was born as a daughter to the Rudolph, Duke of Bavaria, and Anne of Carinthia. We have no information on her childhood; we can only assume she enjoyed the same education as other girls of her rank. She was first mentioned in 1349; on March 4, a wedding contract was sealed in Bacharach on the Rhine, and the wedding ceremony took place probably on the same day. Charles IV was 33, Anna was 20. According to the wedding contract, her dowry was 6,000 talents of silver, warranted by the pledge of five towns in Upper Bavaria – Harstein, Auerbach, Velden, Plech and Neidstein. 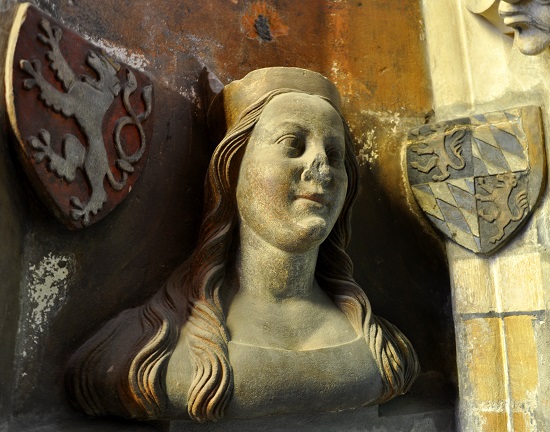 Bust of Anna of Bavaria


For Charles IV, the marriage to Anna of Bavaria was the final confirmation of his ambitions as a sovereign of the Holy Roman Empire. Once he was elected the Roman-German King and crowned in Bonn in November 1346, time was ripe for a contest with the existing imperial ruler, Louis of Bavaria. The approaching confrontation was avoided by Louis’s sudden death in October 1347, but the difficult relationships with many imperial aristocrats remained. The opposition was led by the house of Wittelsbach, of which the deceased Emperor Louis was a member. They tried to appoint a strong opponent against Charles, to avoid the ascent of the Luxembourgian king. The new Bavarian count Louis V started negotiations with the English king Edward III, rather powerful after defeating the French at Crecy. When Charles managed to eliminate the English danger by skillful diplomacy, the discontent Wittelsbachs found a new candidate – Earl Günther of Schwarzburg. He was elected Roman-German King in late January 1349 in Frankfurt, and, despite initial problems, crowned in Aachen in February.


Despite his clear military and diplomatic dominance, Charles IV couldn’t ignore these moves made by the opposition. Unlike his opponent’s, the places of Charles’s election and coronation (Rhens and Bonn) were dubious, which rather marred his legitimacy. He therefore had to use all his diplomatic skills to support his reign and gain the majority of the imperial aristocracy on his side. To weaken the opposition, he began negotiations with part of the Wittelsbach house. The conciliation was enabled, among other things, by the death of Charles’s previous wife Blanche of Valois, who had died in early August 1348. Charles managed to find a compromise with the Bavarian count Rudolph II, even though the latter had just voted for Günther of Schwarzburg. The conciliation was crowned by the wedding with Rudolph’s daughter Anna, by which the Wittelsbach opposition fell apart. This enabled Charles IV to organize the royal coronation in Aachen (July 25, 1349) and take full control.


Anna was crowned the Roman Queen a day after her husband, and on November 1 also became the Queen of Bohemia. She had been already pregnant during the coronation ceremony, and on January 17, 1350, gave birth to Charles’s much wanted successor. The boy was symbolically christened Wenceslas. Spectacular ceremonies followed, and many imperial counts were invited. The name Wenceslas was used in the Přemyslid dynasty since the start of the 13th century. The first king to bear it was Wenceslas I (1205–1253), followed by his grandson Wenceslas II (1271–1305) and grand-grandson Wenceslas III (1289–1306). In 1316, the firstborn son of John of Luxembourg and Elisabeth Přemyslid was also christened Wenceslas; seven years later, upon his confirmation in France, he received a different name, Charles. Unfortunately, Charles’s firstborn son didn’t survive infancy, and died at the age of nearly two. The loss of a heir could, according to many historians, be a bigger blow than the death of the second wife that came only a short time later – Anna broke her neck when she fell down from a horseback.


In the same year, Charles remarried, but he never forgot about his first or second wife, or about a son. He built them altars in the Prague cathedral, near the royal tomb, consecrated to St. Louis, St. Nicolas and the Infants. The first should commemorate Blanche of Valois, the second Anna of Bavaria, and the third Wenceslas. Upon the contest of the archbishop and the pope, a choir of mansioners should stand nearby every day at Virgin Mary prayer, singing to praise the Lord and praying to save their souls.