In his autobiography Vita Caroli Quarti, John’s son Charles IV decided not only to explain his own origin but also his father’s roots: “I wish you know that my father John was begot by Henry VII, Roman Emperor, and Margaret, daughter of the Duke of Brabant. John married Elisabeth, daughter of Wenceslas II, King of Bohemia, and obtained with her the Kingdom of Bohemia as there were no male descendants in the Bohemian royal house. Then he cast out Henry, Duke of Carinthia, who had married the older sister of the said wife, who then died without children.” The wedding of John, 14 at the time, and Elisabeth, 18, took place on the first day of September 1310 in Speyer. The ascent of 14-years old John to the Bohemian throne in autumn 1310 put a stop on four years of disputes over the government. Though John wasn’t too experienced due to his young age, he enjoyed the support of one of the most important European houses – his father was Emperor, and his uncle Baldwin was the archbishop of Trier. The Luxembourgian house was connected to the French royal court by both kinship and politics, and John used this connection many times. 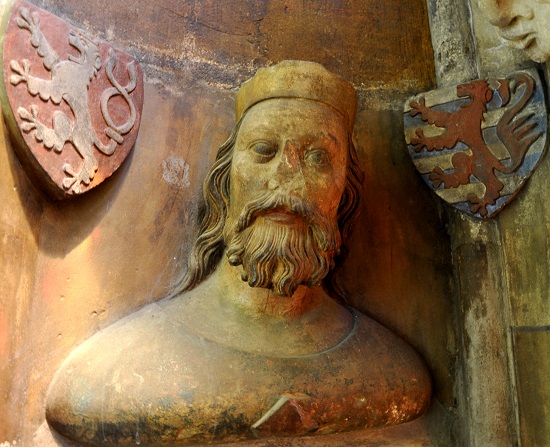 Bust of John of Luxembourg on the triforium of St. Vitus Cathedral


Talking about John’s government, we must emphasize the development of the foreign policy in all directions. In addition to Luxembourg, King John annexed also the Chebsko region to the kingdom of Bohemia in 1313 (first as imperial liege; since 1332 this region was an integral part of the Czech state). Other territorial gains followed the extinction of the Askan house of Brandenburg in Lausitz – in 1319, the Bautzen region was annexed, followed by Gorlitz ten years later. However, much more important was the expansion to Silesia; John, claiming the Polish crown of the Přemyslid, aimed at more annexations of Silesian princedoms to the Czech state. Following a series of negotiations in Trenčín and Visegrad in 1335, John of Luxembourg waived his claims to the Polish crown, while the Polish Kazimierz III recognized the fact that the Silesian princedoms are part of the Kingdom of Bohemia. John’s territorial gains created the ground of the territory later known as the Czech Crown, which established the new organization of government in 1348.


Since the early 1330s, the Luxembourgian activity in northern Italy increased. Louis of Bavaria gave John Bergamo, Milan and other cities as imperial pledge. As John’s son Charles remembered in his autobiography: “While my father stayed in Trident, the following towns in Lombardy were given to him: Brescia, Bergamo, Parma, Cremona, Pavia, Reggio and Modena; also Lucca, Tuscany, with all pertaining districts and counties.” In 1329, King John started a fierce struggle to keep the aforementioned territories in northern Italy. Some of the towns and cities required his protection in the fights against other rich cities of this area. John sent his son Charles, 15 at the time, to Italy. However, the struggle to keep these territories failed, and after 1331, John put most emphasis into the Central European politics. As Zbraslav Chronicles have it: “After the King had spent seven months in Lombardy, coping with many affairs in Germany and France, he confided the Lombard towns to his firstborn son whom he had called from Luxembourg, and having sent the messengers in advance, he decided to leave for Regensburg. There he found Louis of Bavaria, and these two, Louis of Bavaria and King John, often held meetings on an island in the Danube River, discussing their affairs for twenty-two days in utmost secrecy, only assisted by their most trusted advisors.” 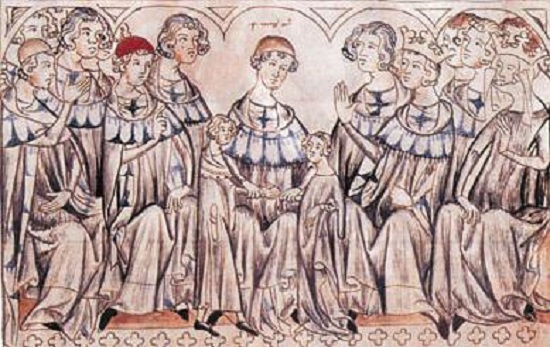 The wedding of John and Elizabeth in Speyer


This active foreign policy was in stark contrast with difficulties John had to face within the Kingdom of Bohemia. On December 25, 1310, on the land assembly, John granted many rights and privileges to the Bohemian aristocracy (the “Inaugural Diploma”) and in February 1311, he was crowned the King of Bohemia at a ceremony in Prague. Yet the beginning of his reign was marred by many difficulties, and further years weren’t peaceful either. The Bohemian aristocrats insisted on their privileges and strong positions, and never hesitated to stand up against the king. The series of minor and major clashes, together with the growing estrangement between John and Elisabeth, forced the king to give up the firm royal reign gradually. The concessions John had to make in the beginning made it difficult for him to enforce the position of a strong monarch. It was true that the conditions of his ascent to the Bohemian throne had been negotiated by his first advisor Peter of Aspelt, the Archbishop of Mainz, in the form of the royal grace, so it was theoretically possible to withdraw or change them; in the real life, however, the aristocrats had no intention to give up their influence. In the early years there was no major confrontation, as the Bohemian lords still respected the importance and influence of John’s father Henry VII, so King John could fully take over the secondary territories – Moravia, Opava region etc.


John of Luxembourg tried to maintain a firm and authoritative government, which was very difficult in the environment where the aristocracy insisted on its right to manage the key offices in the kingdom. In 1315, the king still fought alongside his lords at the Moravian-Slovakian border, but then he decided to strengthen his own position by getting rid of the main leaders of the aristocracy (the arrest of Henry of Lipá, 1315). This unexpected step raised a large response; different aristocracy groups that had competed before united against the king. In the end, Peter of Aspelt and Baldwin of Luxembourg negotiated reconciliation, which de facto reinstated Henry of Lipá’s position.


Another conflict broke out when John was staying in the Empire, supporting Louis of Bavaria. Elisabeth of Bohemia intervened in the disputes of two main aristocracy factions (Henry of Lipá vs. William of Waldeck). Not even the experienced diplomat Peter of Aspelt was able to prevent the civil war that followed, and John was forced to intervene. Yet the military solution proved itself inefficient; the increasing violence only managed to unite both factions against the king again. Henry of Lipá even joined forces with Frederick of Habsburg, to besiege John in Brno. The King of Bohemia began to realize that he would never gain the superior position in the country, and gave up eventually. At the land assembly in Domažlice in April 1318, he acceded to the requirements of the lords, recognized the inaugural diplomas once more, and kept aiming his main interests outside the Bohemian territory ever since.