In the 15th year of the reign of Charles IV, and in the 6th year of him being the emperor, this mighty monarch seemed to be on the top of his power. However, he still missed one extremely important feature – an heir of the throne. His marriage with Blanche of Valois only gave him daughters; the second wife, Anna of Bavaria, gave birth to a son in the beginning of 1350. As the future King of Bohemia, he was named Wenceslas for the patron of the land. By this, Charles followed the example set by his father John who also named his son for the Přemyslid saint – only later, while living in France, Charles adopted his new name after his uncle, French King Charles IV. Charles started planning a big future to his small successor, but the latter died before turning two, followed by Anna of Bavaria a year later. 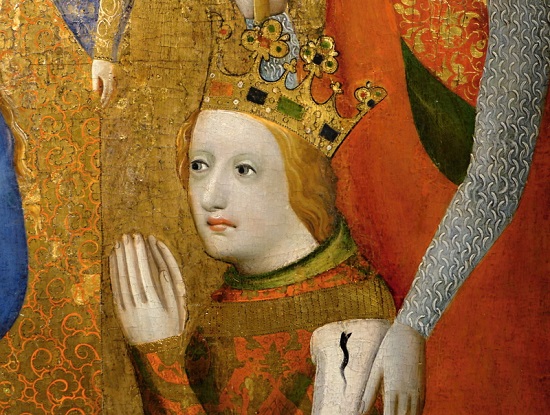 
Mature Charles, almost forty years old, slowly began to lose hope and decided to leave the throne to his brother John Henry, Murgrave of Moravia. John Henry didn’t have any problems with fathering sons; at that time, he had three, which certainly didn’t help the emperor’s self-confidence. However, Charles didn’t give up, and took Anna of Schweidniz for his third wife, initially planned as a wife for the late son Wenceslas. The queen, almost quarter a century younger than her husband, didn’t get pregnant until a few years after the wedding. And this time again, a daughter was born first. Then finally, on February 26, 1361 (as Charles already turned 44), a long-expected son was born in Nuremberg – and once more he was named Wenceslas. The imperial joy was overwhelming: “We’ve got a prince! The noble day of his birth was glorious to us,” called Charles to the world in his message. “Rejoice, all our people; o nation, celebrate in glee! The whole Bohemia shall jubilate over the great happiness that came upon you! Finally, we’ve got a prince!”


The boy who would become Wenceslas IV had his life strictly planned from the infancy. His imperial father saw him not only as the heir of his own lands but also as his successor on the throne of the Holy Roman Empire, and the head of the important European dynasty. Therefore, Charles immediately started planning a suitable wedding, and began to involve little Wenceslas in the statesman’s duties. He hadn’t even waited till the infant learned to walk and talk – a few months after his birth, Wenceslas was already cited in documents as the person signing important agreements (with his own seal), which wasn’t common even in the middle ages. As soon as it was possible, Wenceslas also had to take part in the important events in person – he was only two when he was crowned the King of Bohemia, despite rather reluctant approach of Archbishop Ernest of Pardubice. Like many Bohemian noblemen, Ernest probably considered the coronation of a child of two a profanation of this important act. Yet Charles, in his fervent struggle to ensure Wenceslas’s succession, permitted no resistance.


Due to the coronation, he could give privileges and graces for the King of Bohemia to Wenceslas (until that time, he could only give them to himself, which was a little tedious). The coronation ceremony certainly had to be cut in length and adapted for this special opportunity, yet the child didn’t make it through and cried desperately. Many years later, Wenceslas’s opponents even claimed that the toddler stained the altar in the cathedral during the ceremony in a very unsuitable way. 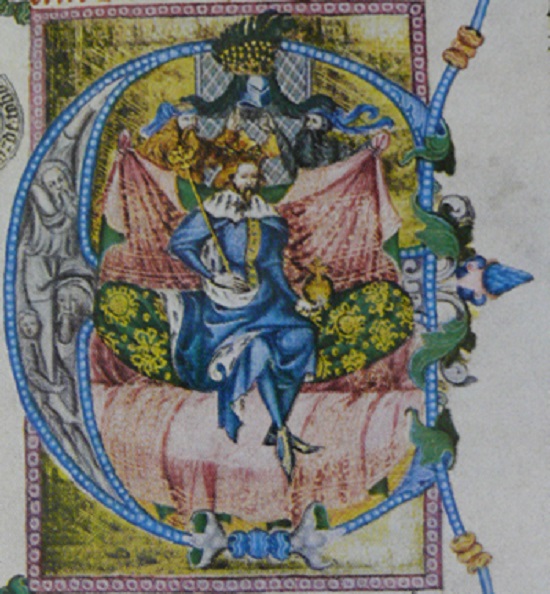 Illumination of the Wenceslas Bible


Some authors assume that it was the demanding education and forced presence at lengthy negotiations and ceremonies that caused Wenceslas’s aversion to monarchial duties; allegedly, that’s why he turned a bad or “lazy” king eventually. In other words, Charles loved his son too much, and endowed him with such attention and duties that irreversibly maimed the boy’s soul. However, this is too much of a simplification – adolescent Wenceslas prepared quite responsibly for his ascent to power in the last years of his father’s life, and when he finally sat on the throne, he ruled purposefully and vigorously at first (in 1376, Charles “pressed” him through the electors’ council, to ensure the imperial royal throne for him).


The main problem was that Charles died at the time his experiences and abilities were needed the most. The most visible, but not the only sign of the upcoming European crisis was the Papal Schism (two competing popes in Rome and Avignon) that broke out shortly before Charles’s death in November 1378. Now this subtle yet immense problem should have been solved by a youngster of seventeen!


The story on the Bohemian, imperial and European level was basically the same – Wenceslas always struggled to continue in his father’s policy, but it wasn’t possible to make it work in the changing conditions. When failures came, and the problems persisted or even grew, the king became stubborn, and continued in his unsuccessful politics, or else completely gave up looking for a solution. He probably had neither courage nor abilities to seek for other ways.


The specific problem of the imperial politics was the growing tension between imperial princes and cities, while the self-confidence of the latter increased steadily. The tension resulted in minor armed conflicts, and the big war was imminent. Instead of settling one conflict after another with patience and hard work, Wenceslas kept insisting on the general peace treaty in the whole Empire – the Landfried, which worked for Charles, but in Wenceslas’s time this option wasn’t really feasible. After ten years of ruling, the king abandoned the Empire almost completely, and after 1389 (when the imperial peace was declared but never really kept) he all but withdrew from the imperial events. He never visited the Empire, and didn’t communicate with important imperial princes. And a journey to Rome to get the imperial crown was entirely out of the question.