Few medieval sovereigns could afford a long mourning over a deceased partner. Also Charles IV started negotiating another marriage almost immediately after the death of his second wife, Anna of Bavaria. In his case, the reason was obvious – despite two previous marriages, he was still short of a male heir, which could always mean a danger of heavy fights for the vacant throne. Finally he chose a charming daughter of the Duke of Schweidnitz, Anna, a young girl already sought for by the Prague court earlier. Charles first planned her as a suitable partner for his infant son Wenceslas. The prince’s sudden death put a stop to these wedding projects, but the untimely death of Anna of Bavaria made Charles revert to the original plan, and marry young Anna of Schweidnitz himself. Bust of Anna of Schweidnitz on the triforium of St. Vitus Cathedral


The first wedding negotiations took place in March in Vienna, where Charles met for consultations with his neighbors, primarily the Austrian duke Albrecht II and Hungarian king Louis I of Anjou, also representing the Polish king Kazimierz. The marriage with Anna must therefore be understood in the context of the Central European politics. Charles wanted to strengthen good relations with his neighbors, and at the same time he supported the position of the Kingdom of Bohemia. Anna’s status may have been lower than that of the Roman and Bohemian king, but still she was a good match. After her mother, she was a niece of the Hungarian king, who gradually became Charles’s key partner – the Polish-Hungarian agreements were supposed to make Louis of Hungary the Polish king later, and his authority increased. The Polish affairs were very interesting for Charles as the Schweidnitz-Jauer Dukedom was the last Silesian enclave outside the control of Bohemian kings. Therefore, the wedding with Anna was primarily a political and strategic move.


The wedding probably took place in Buda, Hungary, on May 27, 1353, not even four months after the death of Anna of Bavaria. The guarantor of the wedding was, apart from Louis of Hungary, the bride’s uncle and then sovereign of the Schweidnitz-Jauer Dukedom, Bolek II. He provided the dowry for Anna – 10,000 talents, stored in pledges of the towns Boleslawiec and Lwówek. Charles, as the husband, promised a dowry for his wife in the amount of 15,000 talents, secured by yields from royal towns – Hradec Králové, Vysoké Mýto and Polička. As Anna was the only child of then deceased Duke Henry II and her uncle Bolek II remained childless, Anna became his heiress. Therefore, the wedding meant the future accession of Schweidnitz-Jauer region to the Czech Crown, though further negotiation guaranteed Bolek lifetime sovereignty and eventually also the continuing reign of his wife, Agnes of Habsburg. The area was therefore annexed by Czech Lands in 1392. 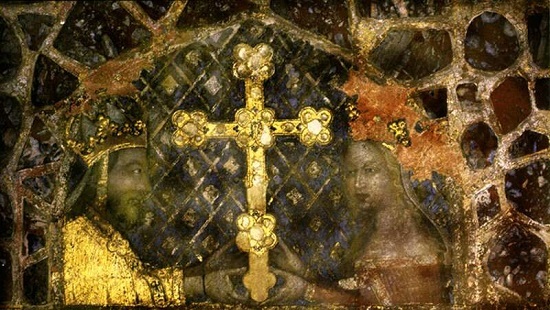 
There are better sources for the times of Anna of Schweidnitz than for her predecessors. That’s how we know that, for example, her personal court was probably bigger and more luxurious than the courts of other Bohemian queens. The likely reason was their position of the Roman queen and pretender of the imperial crown. This position had to correspond with her representation. In addition to usual court clerks, steward and marshal, she also had her own notaries, chaplains and physicians. Apart from a bigger amount of written sources, numerous iconographic items related to Anna of Schweidnitz have preserved. All available pictures show her as a woman of extraordinary charming face. It can be seen on the busts of Charles IV and Anna of Schweidnitz at the balcony of the Virgin Mary’s Church in Mühlhausen, Thuringia, depiction of Anna as Sibyl showing Emperor Augustus  “a woman clothed in sunshine” in the Emauzy Monastery in Prague, the paintings in the Chapel of the Holy Cross at Karlštejn, or the bust in the St. Stephen’s Dome in Vienna; probably the best known depiction can be seen in the triforium in the St. Vitus’s Cathedral at the Prague Castle.


The most important experiences of Anna’s life certainly included the Roman ride and imperial coronation. Soon after the wedding, on July 28, 1353, she was crowned the Queen of Bohemia by the archbishop Ernest of Pardubice in Prague, and in February she became the Roman-German Queen in Aachen. The peak, however, should be the imperial coronation. The journey to Rome was long and dangerous. The monarch had to be protected by armed squad, which made the journey very expensive and unaffordable for many Roman kings. This is another proof of Charles’s greatness, as he made not only one but two Roman rides – in 1355 and then in 1367–1368. During the first one, the Pope wasn’t continuously present in Rome as his headquarters was in Avignon at the time. He therefore sent his deputy, Cardinal Pierre Bertrand de Colombier. On April 5, 1355, the cardinal crowned Charles with the imperial diadem in St. Peter’s Basilica. Anna of Schweidnitz was crowned together with Charles, and therefore she, not long after her wedding, achieved the most prestigious title a medieval woman could ever reach.


In 1358, after five years of marriage, Charles and Anna of Schweidnitz had their first daughter, named Elisabeth for Charles’s mother. She was later married off to Albrecht III of Austria. In February 1361, the long-expected son Wenceslas was born in Nuremberg. The birth of much wanted male offspring made Charles extremely happy. When the baby was born, the emperor donated the same weight of gold – 16 talents – to the Virgin Mary’s Church in Aachen. Thus he wanted to emphasize the link between the Luxembourgian dynasty and Charles the Great, whose main place of residence was in Aachen, and was also buried there. The residents of Nuremberg were absolved from taxes for some time. Charles also released some prisoners and had the imperial jewels brought from Prague and exhibited in Nuremberg. However, Wenceslas, the future fourth Bohemian king of this name, spent most of his childhood at the Prague court where his father wanted to educate him, with the help of teachers and tutors, in monarch duties.


The joy about the birth of a son, and expectations related to another pregnancy of the Emperor’s wife, were however marred by family tragedy that occurred a year later. The sources only include a short note that Anna of Schweidnitz died on July 11, 1362, upon the birth of her third child. Charles became a widower for the third time. We don’t know the place of Anna’s death, probably either Prague or Karlštejn. We don’t know anything about the funeral ceremony either, or whether Charles IV was present. Anna of Schweidnitz was buried in St. Vitus’s Cathedral.